Provincial Nominee Programs (PNP) in Canada, launched in 1998 are the priority of several foreign workers who have skills, education and work experience. Applicants are supposed to contribute to the economy of a specific province or territory and meet labour needs. A candidate must be willing to live in that particular province/territory and ultimately want to become a permanent resident of Canada.

PNP Canada is a pathway to obtain Canada’s PR. First candidate needs to submit an EOI (Expression of Interest) to the desired province/territory (PT) and then a Notification of Interest (NOI) is issued by the government.

Next, the candidate accepts and signs the NOI then sends it back to PT by attaching the necessary documents with it. PT examines the application and issues a provincial/territorial nomination. Specific time is given to the applicant to apply Permanent Residence of Canada to Immigration, Refugees and Citizenship Canada (IRCC).

You can apply for Canada Provincial Nominee Programs (PNP) immigration by choosing any province or territory mentioned below as per your suitability. 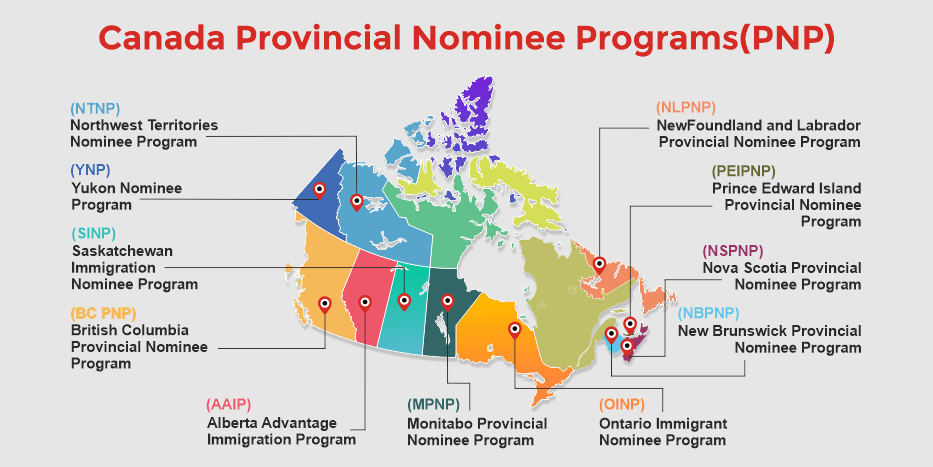 British Columbia is the western most and third-most populous province in Canada. BC has diverse geography, high standard of living and abundant job opportunities. If applicants meet the eligibility criteria, BC issue nominations to recent graduates, entrepreneurs, business people, skilled and semi-skilled workers, tech workers, healthcare professionals and truck drivers. There are three major programs to choose under BC Provincial Nominee Program.

Manitoba is situated in the longitudinal centre of Canada and is the fifth-most populous province. Manitoba’s capital and largest city is Winnipeg where Legislative Assembly of Manitoba and the Provincial Court are also situated. Skilled workers, recent graduates from Manitoba institutes and business people can obtain nominations; three major programs are offered by Manitoba PNP Program.

New Brunswick, located on Canada’s East coast, is one of the four Atlantic Provinces;  its official languages are both English and French. New immigrants have the option of settling in small communities or larger cities like Fredericton, Saint John, and Moncton. If Skilled workers, business people and experienced truck drivers meet eligibility criteria and have valid job offer form NB employer, they can obtain nomination from New Brunswick, below are the streams available under NB PNP.

Newfoundland and Labrador is the easternmost province and one of the Atlantic Provinces of Canada. Capital city of NL is St. John’s which is largest and home to almost 40 percent of the province’s population. NL PNP is an economic immigration program created for skilled immigrants and their families who want to live and work in NL, following are the pathways under which applicants may get nominated.

Nova Scotia is one of the three Maritime Provinces and one of the four Atlantic Provinces. The Jobs in-Demand stream under NS PNP focuses on NOC C and D occupations that are in great demand in Nova Scotia’s labour market. Moreover, a valid job offer from Nova Scotia employer is also required. Halifax is Nova Scotia’s capital and largest city, above all it is home to roughly 45 percent of the province’s population. Being eligible under any of the streams stated below may allow an applicant to immigrate to Canada.

Ontario is situated in central Canada, which is the most populous province with around 38% of the country’s population, Toronto (capital of Ontario) and Ottawa (capital of Canada), the major cities of Canada, also represent Ontario. The OINP accepts Expression of Interest from foreign workers, international students, and anyone who has the required abilities, experience, and education to meet the province’s nomination programs. Streams under OINP are divided into four major programs mentioned below.

Prince Edward Island is the smallest province in Canada, in terms of both size and population, though it is most densely populated. Applicants are chosen for nomination based on their desire to live and work in PEI, as well as their financial ability to do so. Priority is given to entrepreneurs and applicants qualified to work in areas with skill shortages. PEIPNP offer three main programs and different streams under them.

Saskatchewan is located in western Canada which is in the middle of three Prairie Provinces, with Saskatoon as the province’s largest city and Regina as the provincial capital. Job offer is not obligatory for SINP, applicants who are highly skilled in an in-demand occupation could attain the nomination from the province by fulfilling eligibility criteria, SINP offers three major programs to choose from.

Yukon is the smallest territory located in the westernmost part of Canada. The capital city of this territory is Whitehorse. Applicants from inside or outside Canada can apply for Yukon Nominee Program; most importantly they need to meet specific requirements and must have a valid job offer from Yukon employer, following are the programs under YNP.

All and all there are more than 80 streams under Provincial Nominee Programs  (PNP) in Canada, every province and territory has their own streams for nominations except Quebec and Nunavut. Applicants living inland or outland Canada can choose province/territory and stream as per their suitability.

Federal Government of Canada takes the final immigration decision as a result PNP programs Canada is a two step process; firstly, the provincial government issues nomination to the applicant, and then the Canadian federal government approves the permanent residence of candidate.

All Provincial Nominee Programs (PNP) in Canada have one stream which works in collaboration with federal Express Entry program; nominations which are issued under these streams are known as Enhanced Nominations. Candidates obtain 600 additional Comprehensive Ranking System (CRS) points in their profile, which means a certainty to obtaining an Invitation to Apply (ITA) for permanent residence in the upcoming round of the Express Entry draw.

Another way is Base Nomination, in which Provincial Nominee Programs (PNP) streams are applied directly and after obtaining nomination from province/territory, federal government processes permanent residence application.

If you are eligible for Express Entry profile

If you are ineligible for Express Entry profile

Applications linked with Express Entry (Enhanced Nominations) consume less processing time, generally 6 months, whereas others (Base Nominations) could be lengthy, like 1-2 years or even more. You are required to pass a medical exam and obtain a police check certificate whilst applying for any PNP programs. Until you obtain approval of permanent residence, you cannot migrate to another PT on the basis of issued nomination.

(or any other necessary documents specified by specific province/territory)

Who can apply for Provincial Nominee Programs in Canada?

Foreign nationals who can fulfill the specific labour market needs of provinces or territories of Canada can apply under PNP. All provinces/territories have their own unique streams and requirements thus applicants must meet the eligibility criteria

Some programs require job offers and some need investment by entrepreneurs/business people. Even candidates are offered streams in which they can live and work in rural areas and contribute to upgrade them because Canadian provinces and territories are emphasizing to enhance the development of rural areas. From one province to the next, the selection procedure and requirements for obtaining a Provincial Nominee Programs (PNP) Canada visa are different.

A minor error in PNP profile could forbid you to proceed with your application, since requirements and processing of provinces and territories vary. As PNP standards are very high and complicated, it is advised to seek the assistance of immigration professionals to avoid any foreseen trouble.

Career Plus Immigration Consultants are known for their honesty, wisdom and diligent efforts. Our experienced immigration lawyers in Canada and professional team in India have been serving their clients since 1999. Contact us and explore the best way to immigrate Canada without any obstacles.

We are one of the best reviewed Immigration Consultancy Firms in Canada.

If you want to be represented by the best immigration firm for your case then do not hesitate and write us a mail!

Located in Alberta, the immigration firm of Career Plus Immigration Consultants Inc. represents clients throughout Canada.

This website uses cookies to improve your service experience. Your continued use will mean you accept them unless you opt-out.

We may request cookies to be set on your device. We use cookies to let us know when you visit our websites, how you interact with us, to enrich your user experience, and to customize your relationship with our website.

Click on the different category headings to find out more. You can also change some of your preferences. Note that blocking some types of cookies may impact your experience on our websites and the services we are able to offer.

These cookies are strictly necessary to provide you with services available through our website and to use some of its features.

Because these cookies are strictly necessary to deliver the website, refuseing them will have impact how our site functions. You always can block or delete cookies by changing your browser settings and force blocking all cookies on this website. But this will always prompt you to accept/refuse cookies when revisiting our site.

We fully respect if you want to refuse cookies but to avoid asking you again and again kindly allow us to store a cookie for that. You are free to opt out any time or opt in for other cookies to get a better experience. If you refuse cookies we will remove all set cookies in our domain.

We provide you with a list of stored cookies on your computer in our domain so you can check what we stored. Due to security reasons we are not able to show or modify cookies from other domains. You can check these in your browser security settings.

We also use different external services like Google Webfonts, Google Maps, and external Video providers. Since these providers may collect personal data like your IP address we allow you to block them here. Please be aware that this might heavily reduce the functionality and appearance of our site. Changes will take effect once you reload the page.